On January 21 at Khe Sanh, 30,000 North Vietnamese troops attacked an air base held by just 6,000 United States Marines. The attack on Khe Sanh, however, proved to be a diversionary tactic for the larger Tet Offensive.

January 30 marked the first day of the Vietnamese lunar new year celebration, called Tet. Just days before, as the Army of the Republic of Vietnam (ARVN) prepared to observe the holiday with a truce, some 84,000 North Vietnamese Army (NVA)and Viet Cong (VC) troops prepared coordinated attacks on 36 provincial capitals in South Vietnam, along with dozens of U.S. and ARVN military bases and large cities including Huế, Da Nang, and Saigon.

The north launched near simultaneous attacks on more than 100 South Vietnamese and American military locations. January 31 proved to be the bloodiest day of the entire war for the Americans, losing 246 people.

Militarily, the Tet Offensive was an abject failure for the north — NVA and VC forces suffered massive casualties and failed to hold any gains they had made. Perhaps more importantly, the people of South Vietnam were not inspired to rise up against their government and U.S. forces, as had been the hope of the offensive’s architect, Ho Chi Minh.

Politically, however, Tet was a turning point in the war.

Having been assured that the enemy was both demoralized and incapable of mounting a major offensive, the American public was sobered by nightly images of vicious combat and a mounting U.S. body count — including more than 2,400 troops killed in May 1968, the bloodiest month of the conflict. In February, news anchorman Walter Cronkite announced that it seemed “more certain than ever that the bloody experience of Vietnam is to end in a stalemate.”

As public support for President Johnson’s handing of the war fell to record lows, Johnson recalled General William Westmoreland to Washington, replacing him with General Creighton Abrams, but it was too late. Facing primary challenges from emboldened candidates within his own party, the President announced that he would neither seek nor accept the Democratic nomination for reelection. While Tet Offensive failed to achieve North Vietnam’s military goals, it had inadvertently succeeded in turning the tide of American public sentiment, signaling the beginning of the end of Johnson’s presidency.

Go to Panel 35 E. Half of the panels on The Wall include names of those who died in 1968, the deadliest year of the Vietnam War.  Among the major engagements of that year, the siege of Khe Sanh, the battle of Hue, and the Tet Offensive were among the bloodiest of the war.

Beginning on January 30, 1968, the Tet Offensive consisted of surprise attacks by the North Vietnamese against more than 100 military and civilian control centers all over South Vietnam. The campaign launched on the Tet new year holiday. While the fighting would continue for months, the United States would lose 246 service members on January 31 alone, making it the bloodiest day of the war.  The deaths from just that day stretch from Panel 35 East, Line 84 to Panel 36 East, Line 44 on The Wall.

The first name listed under that day is Corporal Ghalib A. Abdullah on Panel 35 East, Line 84. During the Tet Offensive assault on Can Tho Army Airfield, Abdullah was defending the perimeter fence when he was killed by enemy fire.  Ghalib was from Brooklyn and a 1960 graduate of the School of Industrial Arts in New York City. 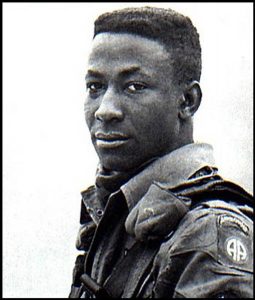 was 25 years old when his heroic actions on February 21, 1968 posthumously earned him the Medal of Honor.

Sims was born in 1942 in Port St. Joe, Florida. He was orphaned at an early age after both of his parents were deceased. He was later adopted at age 13 by James and Irene Sims.

Sims enlisted in the U.S. Army in September 1961 after graduating from high school. That same year, he married his high school sweetheart, Mary, on Christmas Day in Fort Bragg, North Carolina.

Sims completed his basic training at Fort Jackson, South Carolina and then attended Airborne School at Fort Benning, Georgia before being sent to the 82nd Airborne Division at Fort Bragg. In August 1967, Sims moved to Fort Campbell, Kentucky to join Company D, 2nd Battalion (Airborne), 501st Parachute Infantry Regiment, 101st Airborne Division and from there – was sent to Vietnam. He held the rank of Staff Sergeant.

Beginning on January 30, 1968, the Tet Offensive consisted of surprise attacks by the North Vietnamese against more than 100 military and civilian control centers all over South Vietnam. The Tet Offensive began with the invasion and occupation of Hue City and would last through March. US Marines spent nearly a month engaged in a brutal battle to retake the city. Sims’ company was near the city of Hue when the Tet Offensive began.

The chaotic battle saw unprecedented heroism – and resulted in five Medals of Honor, including Sims.

On February 21, 1968 Sims and his squad were on a search and destroy mission when they heard a concealed booby trap being triggered in front of them. Sims warned his comrades then hurled himself upon the device as it exploded, taking the full impact of the blast. He sacrificed his life to save members of his squad.

Citation: For conspicuous gallantry and intrepidity in action at the risk of his life above and beyond the call of duty. S/Sgt. Sims distinguished himself while serving as a squad leader with Company D. Company D was assaulting a heavily fortified enemy position concealed within a dense wooded area when it encountered strong enemy defensive fire. Once within the woodline, S/Sgt. Sims led his squad in a furious attack against an enemy force which had pinned down the 1st Platoon and threatened to overrun it. His skillful leadership provided the platoon with freedom of movement and enabled it to regain the initiative. S/Sgt. Sims was then ordered to move his squad to a position where he could provide covering fire for the company command group and to link up with the 3rd Platoon, which was under heavy enemy pressure. After moving no more than 30 meters S/Sgt. Sims noticed that a brick structure in which ammunition was stocked was on fire. Realizing the danger, S/Sgt. Sims took immediate action to move his squad from this position. Though in the process of leaving the area 2 members of his squad were injured by the subsequent explosion of the ammunition, S/Sgt. Sims’ prompt actions undoubtedly prevented more serious casualties from occurring. While continuing through the dense woods amidst heavy enemy fire, S/Sgt. Sims and his squad were approaching a bunker when they heard the unmistakable noise of a concealed booby trap being triggered immediately to their front. S/Sgt. Sims warned his comrades of the danger and unhesitatingly hurled himself upon the device as it exploded, taking the full impact of the blast. In so protecting his fellow soldiers, he willingly sacrificed his life. S/Sgt. Sims’ extraordinary heroism at the cost of his life is in keeping with the highest traditions of the military service and reflects great credit upon himself and the U.S. Army. 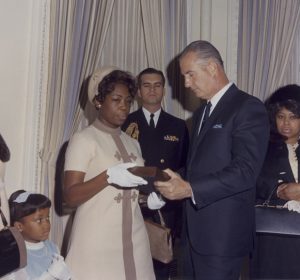 The Congressional Medal of Honor was presented to his family in Washington, D.C. on Dec. 2, 1969.  Vice President Spiro T. Agnew awarded the Medal of Honor posthumously to his wife, Mary Sims. Their daughter, Gina, was in attendance along with his parents, Jim and Irene.

Sims is buried at Barrancas National Cemetery in Pensacola, Florida. His name is remembered on Panel 40E, Line 56 of The Wall. 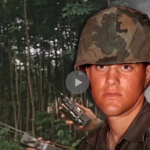 This segment from Iowa Public Television’s Iowans Remember Vietnam includes archival footage and interviews with Iowa veteran Paul Dwyer. Dwyer describes his role as a radio operator during the war, and explains his experiences during the Tet offensive.

Listen to his story 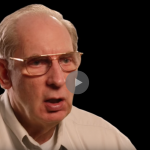 Charles Sudholt, a U.S. Marine Veteran, shares his experience on the day that the Tet Offensive was launched.

Listen to his story

On February 1, 1968 General William Westmoreland describes the Tet Offensive attack on the U.S. embassy in Saigon as a Viet Cong defeat.

Americans’ opinions about the war were shaped not just by news reports and photographs but also by editorials.  While many media remained supportive of the war, some major news organizations became increasingly critical as time passed.

After senior military leaders and the President of the United States told the American public that the enemy was all but defeated and could not launch a major operation, Americans watched the news footage that showed just the opposite.

In February 1968, CBS News aired on television a special report on the aftermath of the Tet Offensive.  At the end of the report, renowned anchorman Walter Cronkite read a brief editorial suggesting that the United States was mired in a stalemate.

It is claimed that after President Johnson watched the report, he said “If I’ve lost Cronkite, I’ve lost middle America.” In March of 1968, Johnson announced that he would not seek reelection.

Learn more about the Media in Vietnam
more
The Tet Offensive