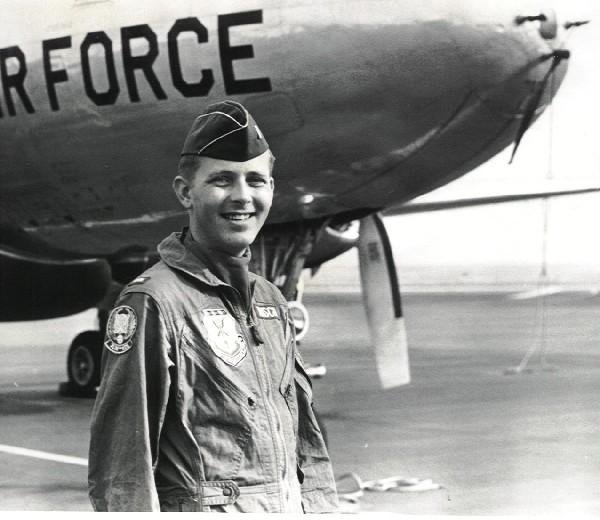 Stephen Rusch was born on July 28, 1943, and grew up in West Amwell, New Jersey. Rusch had one sister, Cynthia. His father was an inventor and vice president of Opinion Research Corp. in Princeton, New Jersey. Stephen graduated from the Hun School of Princeton Township. In high school, he was a lifeguard at Pretty Brook Tennis Club.

Rusch was characterized as an accomplished musician. He played guitar and banjo and sang and composed folk songs. On weekends, he played gigs at coffee houses in New Jersey and Greenwich Village, New York. He was attending Drew University when he met his future wife, Judy. They had two daughters – Sharon and Rebecca.

He served in the US Air Force as a Captain (CAPT) in the 4th Tactical Fighter Squadron. Rusch was a weapons systems operator.

On March 7, 1972, U.S. Air Force Captain Stephen A. Rusch was the weapons systems officer in an F-4E Phantom II aircraft when he was attacking enemy targets over southern Laos. The plane was the number two aircraft in a flight of two. When his aircraft was cleared to begin its second run over enemy targets, the flight leader of the number one aircraft lost sight of his plane. He then observed enemy ground fire followed by a large explosion. Days later, Stephen Rusch and the pilot, Carter A. Howell, were declared missing in action.

In the years that followed, a joint team, led by the Joint POW/MIA Accounting Command (JPAC), investigated the incident.

Excavations continued throughout 2002 and 2003, and joint teams conducted two excavations of the crash site where they recovered human remains and supplementary evidence, including U.S. coins and life support equipment. DNA and dental comparisons were then used to help identify Rusch.  Unfortunately, there was not enough evidence recovered to positively identify Howell, who is still officially listed as unaccounted for.

The last traces of Rusch—his dental remains—were found and identified in 2007. His remains were escorted from Honolulu, Hawaii, to Arlington National Cemetery by his daughter, Sharon. He was buried on November 30, 2007, with full military honors.

His name is remembered on Panel 2W, Line 113 of The Wall. 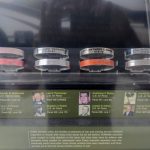 For 35 years, Stephen Rusch was listed as Missing in Action.

During the Vietnam War, POW/MIA bracelets were created and distributed to bring awareness to those service members whose remains were unaccounted for. Rusch’s POW/MIA bracelet is currently a part of The Wall That Heals mobile exhibit.

While Rusch’s remains were accounted for and repatriated, approximately 1,500 service members are still listed as Missing in Action. 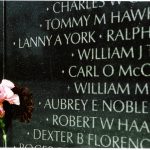 Sharon and Rebecca Rusch shared their story at the Memorial Day Observance at The Wall in 2019.

Sharon chose a path in the U.S. military, similar to her father where she has spent 28 years in the U.S. Air Force. Sharon currently serves as the Command Surgeon, Headquarters, Air Combat Command, Langley AFB, Virginia.

While she did not join the military because of her father, the connections she’s made has led her to remain.

“Having spent the last 27 years in the military, I better understand what it means to serve your country, and what our young airmen, soldiers, sailors and Marines are willing to sacrifice for the defense of our freedoms and democracy,” she said.

Rebecca was only three years old when her father went missing in action.

“I had the same gaping hole in my life,” she told the crowd at the Memorial Day Observance at The Wall. “So I really struggled to mourn a man that I never knew.”

For much of her life, she didn’t embrace her dad’s service. She felt the sting of his absence and blamed the demon of war. When they buried her father’s remains, she knew his journey was over, but hers was just beginning.

In 2015, she underwent her most challenging journey yet. As a professional athlete and cyclist, Rebecca Rusch biked 1,200 miles down the Ho Chi Minh Trail, through Vietnam and the jungles of Laos and Cambodia, to find the crash site of her father. Her journey, along with Vietnamese mountain bike/racer Huyen Nguyen, was captured in the documentary Blood Road.

“If anything should happen to me, please don’t let me die to Sharon and Becky. Be Good, Steve.”

U.S. Air Force Captain Stephen Rusch wrote these words in his last letter home before his plane was shot down over Laos in 1972.

Rebecca was three years old when her father went missing. Sharon was three days away from her sixth birthday.

“We suffered silently, privately alone,” Rebecca said, admitting that they never talked about their father’s loss. They lived life alongside grief until they both endured on their personal path toward healing. It eventually led them to volunteer at the Vietnam Veterans Memorial in Washington, D.C.

Airman Missing In Action From The Vietnam War Is Identified (Rusch): DPAA

Discovering life amid destruction: A biker’s journey through the past on the Blood Road: Sports Illustrated