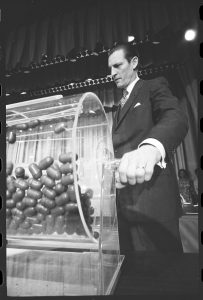 Two-thirds of the U.S. military who served in the Vietnam War — and more than half of the names on The Wall — volunteered for duty. The other one-third were drafted, primarily into the Army. The Selective Service System during the Vietnam war was highly controversial, especially because early in the war draftees came disproportionately from poor, working-class, rural, and minority populations.

Military conscription, commonly known as “the draft,” is one of the most complex topics related to the Vietnam War.  It is emotional for many people – those who chose to serve when drafted, those who sought deferments to delay or avoid serving, to those who refused to serve and went to jail or left the country.  Although statistics from different sources often conflict, it is clear that the draft was grossly unfair to segments of the population, especially early in the war.  The majority of those who served during the Vietnam War were volunteers – not draftees – even though our public recollection often tells us just the opposite.  Public backlash from draft-eligible men is a primary reason cited by many as to why public sentiment turned against the war effort.

One thing is certain – the Vietnam War was not the first time in our nation’s history that people were drafted, and it may not be the last.

The fact is that military conscription has been a regular practice in the United States since the American Revolution. When there weren’t enough volunteers to meet the needs of the military, the Selective Service System (the draft) was used to cover the shortfall.  After WWII, the U.S. maintained a “peacetime” draft, so the draft already was in place as the U.S. deepened its involvement in Vietnam.  In 1965, President Johnson doubled monthly draft calls to 35,000.

Local draft boards called up registered males and evaluated them for service. These boards were often made up of military veterans, who granted exemptions and deferments for a variety of reasons such as medical issues and student status. Many people perceived the deferment process to advantage white males with financial privilege or political connections. This perception is supported by race and ethnicity data: an October 1966 report by the National Advisory Commission on Selective Service showed that only 1.3 percent of local board members were African American. By comparison, African Americans constituted 11 percent of the U.S. population, 16.3 percent of all draftees, and 23 percent of all combat troops in Vietnam in 1967.

A 1969 revision of the Selective Service Act diminished the power of local draft boards and instituted a national lottery system. On December 1 of that year, on national television, capsules containing birth dates were pulled out of a large bowl. Those dates were then mounted on a large board, in the order in which they were drawn. September 14th was the first date placed on the board, and in 1970 local draft boards began filling their quotas with draft-eligible men born on that date.

Thousands of draft-age men refused military service in Vietnam. Burning draft cards, at first a symbolic protest, took on added significance in 1965 when President Johnson signed a law criminalizing the act. Some fled the country, often to Canada. A small number of men served jail sentences in order to protest the war. More than 3,000 men went to prison for some form of draft resistance.

Evolution of the Draft 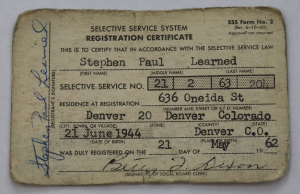 Leading up to and during the Vietnam War, the draft evolved in how individuals could “defer” their service; in the way the draft system worked; and in the growth of popular resistance against a draft system. First, there were several ways in which an individual could receive a deferment of service with changes to draft classifications introduced in 1962, including: being a college student; being a student at a divinity school, or being a clergy leader; having dependent children; being the sole supporter of a parent; various forms of medical exemptions.

On November 26, 1969, President Nixon signed an amendment to the Military Selective Service Act of 1967 that established conscription based on random selection (lottery). Opposition to the draft during Vietnam was widespread, with some personally opposed to forced military service, some opposed to the war as a whole as illegitimate and immoral, and some opposed to the system of deferments which led to a disproportionately working class force in Vietnam— as many as three quarters of those who served in Vietnam were from either working or lower class families. In 1971, student deferments were ended, and draft boards (who would review other types of deferments which were still allowed) were compelled to revise their makeup if necessary to better reflect the communities they represented. These changes sought to make the process and priorities for induction more transparent and fair by creating a process of random selection, as opposed to the (some would argue) subjective processes of selection that would occur within local draft boards.

Between 1964 and 1973, nearly two million men were drafted. In 1973, in large part due to public opinion, the draft officially ended and, with the support of President Nixon, an all-volunteer military force was established.

The all-volunteer force continues today, which has led to significant differences in the composition of the military as compared to American society. For example, recruits today come primarily from the middle and lower classes, with the distribution not reflecting that of the greater American society. Many who choose to enlist cite stable pay, medical benefits, and the possibility of advancement as motivations for joining the military. These are benefits that the military uses in its recruitment efforts. Regardless, opposition to the all-volunteer force exists, for various reasons, from both the general public and the military community.

Learn more about the Evolution of the Draft
more
The Draft

Two-thirds of the U.S. military who served in the Vietnam War — and more than half of the names on The Wall — volunteered for duty. The other one-third were drafted, primarily into the Army. Beginning in 1969, draftees were picked via a televised lottery based on date of birth. Previously, draft selection was made at a local level.

A draft card is part of VVMF’s The Wall That Heals exhibit. Callie Wright, VVMF’s Director of Education, talks about the draft while the exhibit was in Marco Island, Florida in February 2020.

The draft is one of the most complex topics related to the Vietnam War, and its perceived inequity is often cited as a major factor in turning public sentiment against the war effort. In this episode, Callie Wright interviews two veterans who were drafted —Ernie Guthrie of rural Georgia, and Michael McMahon of New York City —about their personal experiences with the Selective Service System.