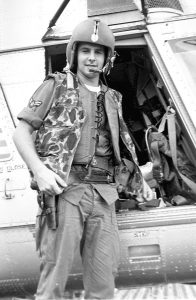 William Pitsenbarger was born on July 8, 1944 in Piqua, Ohio.

At age 17, he wanted to quit school to join the U.S. Army Special Forces “Green Berets,” but his parents persuaded him to finish high school. After he graduated in 1962, he enlisted in the U.S. Air Force. After he completed Air Force basic training, he volunteered for pararescue work and embarked on a rigorous training program, which included U.S. Army parachute school, survival school, a rescue and survival medical course, and the U.S. Navy’s scuba diving school. More Air Force rescue training and jungle survival school followed.

Pitsenbarger ‘Pits’ arrived in Vietnam in August 1965. He served as a member of the 38th Aerospace Rescue and Recovery Squadron at Bien Hoa, near Saigon. Detachment 6 flew three HH-43F Huskie helicopters, which recovered downed airmen and injured ground troops.

On April 11, 1966, a call came to help 134 men of Charlie Company, 2nd Battalion, 16th Infantry, 1st Infantry Division.  The soldiers were surrounded by a battalion of Viet Cong troops near Cam My, Vietnam. The company was pinned down and casualties were mounting. Pits joined the rescue efforts after Detachment 6 of the USAF’s 38th Aerospace Rescue and Recovery Squadron received a call to help evacuate the wounded.

Pits volunteered to be lowered down to hoist the wounded, where they would then be sent to a nearby airfield. He helped organize the rescue efforts and was able to pull out nine soldiers. When Pits had the option to leave with the helicopter, he elected to stay and care for the wounded and dying – all while under fire. The fighting grew intense and went into the night. He gathered weapons and ammunition from the dead, and continued to look after the wounded until he was killed.  Charlie Company suffered a devastating 80% casualties.

For his actions, Pits was posthumously awarded the Air Force Cross. It wasn’t until surviving comrades and eyewitnesses put in requests and testimonies for an upgrade, that it was granted. It took 34 years before the Medal of Honor recommendation came to fruition – and his parents accepted the award on his behalf on Dec. 8, 2000.

‘Pits’ completed more than 300 missions in Vietnam. He was 21 years old when he lost his life, but he is remembered for how honorably and selflessly he lived.

His story is also told in the film, “The Last Full Measure.”

The name of William Pitsenbarger is inscribed on Panel 6E, Line 102 of The Wall. 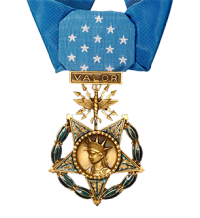 On April 11, 1966, a call came to help 134 men of Charlie Company, 2nd Battalion, 16th Infantry, 1st Infantry Division.  The soldiers were surrounded by a battalion of Viet Cong troops near Cam My, Vietnam. Pits joined the rescue efforts after Detachment 6 of the USAF’s 38th Aerospace Rescue and Recovery Squadron received a call to help evacuate the wounded. Pits helped organize the rescue efforts and was able to pull out nine soldiers. When Pits had the option to leave with the helicopter, he elected to stay and care for the wounded and dying – all while under fire. The fighting grew intense and went into the night. He gathered weapons and ammunition from the dead, and continued to look after the wounded until he was killed.

William H. Pitsenbarger had his Air Force Cross posthumously upgraded to the Medal of Honor. His parents accepted the award on his behalf in 2000.

Citation: Airman First Class Pitsenbarger distinguished himself by extreme valor on 11 April 1966 near Cam My, Republic of Vietnam, while assigned as a Pararescue Crew Member, Detachment 6, 38th Aerospace Rescue and Recovery Squadron. On that date, Airman Pitsenbarger was aboard a rescue helicopter responding to a call for evacuation of casualties incurred in an ongoing firefight between elements of the United States Army’s 1st Infantry Division and a sizeable enemy force approximately 35 miles east of Saigon. With complete disregard for personal safety, Airman Pitsenbarger volunteered to ride a hoist more than one hundred feet through the jungle, to the ground. On the ground, he organized and coordinated rescue efforts, cared for the wounded, prepared casualties for evacuation, and insured that the recovery operation continued in a smooth and orderly fashion. Through his personal efforts, the evacuation of the wounded was greatly expedited. As each of the nine casualties evacuated that day was recovered, Airman Pitsenbarger refused evacuation in order to get more wounded soldiers to safety. After several pick-ups, one of the two rescue helicopters involved in the evacuation was struck by heavy enemy ground fire and was forced to leave the scene for an emergency landing. Airman Pitsenbarger stayed behind on the ground to perform medical duties. Shortly thereafter, the area came under sniper and mortar fire. During a subsequent attempt to evacuate the site, American forces came under heavy assault by a large Viet Cong force. When the enemy launched the assault, the evacuation was called off and Airman Pitsenbarger took up arms with the besieged infantrymen. He courageously resisted the enemy, braving intense gunfire to gather and distribute vital ammunition to American defenders. As the battle raged on, he repeatedly exposed himself to enemy fire to care for the wounded, pull them out of the line of fire, and return fire whenever he could, during which time he was wounded three times. Despite his wounds, he valiantly fought on, simultaneously treating as many wounded as possible. In the vicious fighting that followed, the American forces suffered 80 percent casualties as their perimeter was breached, and Airman Pitsenbarger was fatally wounded. Airman Pitsenbarger exposed himself to almost certain death by staying on the ground, and perished while saving the lives of wounded infantrymen.

The Medal of Honor

Every Medal of Honor story is unique.

In an uncomfortable war zone thousands of miles from home, chaplains are often the only sense of peace and calm for service members.  Navy Chaplain Vincent R. Capodanno was amongst the best, earning the title of the “grunt padre” from the Marines he served.  His efforts to support them would take him to foxholes in distant outposts, rainy nights in the jungle and into the chaos of battle.

On September 4, 1967, while providing comfort and aid to the 3rd Battalion, 5th Marines, an already wounded Father Capodanno rushed forward to comfort a wounded corpsman.  While administering last rites, he was shot more than 27 times. This act of heroism would earn him the Medal of Honor.

His service to his country was as great as his service to the Roman Catholic Church – and for that he is currently being beatified.  That process, known as canonization, is when the church endeavors to prove that a person lived and died in such an exemplary way that they deserve to be recognized as a saint.

The Medal of Honor is the highest distinction that can be awarded by the President of the United States, in the name of the Congress, to members of the U.S. armed forces who have distinguished themselves by going above and beyond the call of duty, risking their lives while exhibiting intrepidity and valor.

There are three similar, yet distinct, versions of the Medal of Honor, one for each military department. The medals are similar in that each consists of a variation of a five-pointed star worn around the neck on a light blue ribbon.

Only slightly more than 3,500 Medals of Honor have been awarded to members of all services. Of the millions of U.S. service members who served during the Vietnam War, only 263 were awarded the Medal of Honor, including those who survived and those who died.

Learn more about the Medal of Honor
more
William Pitsenbarger

A promise fulfilled: Filming a story of heroism in battle: CBS Sunday Morning