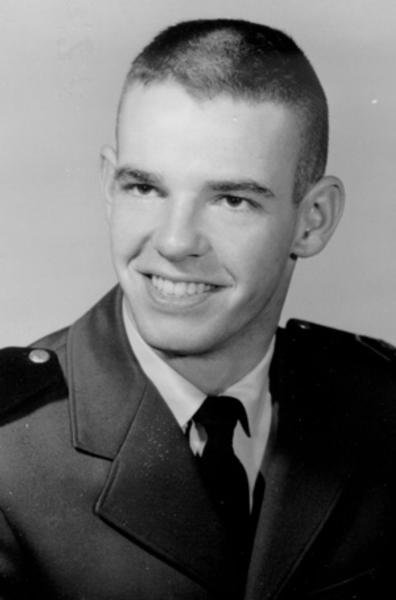 Morgan Donahue was born on May 2, 1944, in Hollywood, California. He was the son of Vincent J. and Shirley Morgan Donahue. He had one brother, Jeffrey. Donahue grew up in Alexandria, Virginia. After graduating high school, he attended the University of Maryland from September 1962 to June 1963. He then entered the U.S. Air Force Academy on June 24, 1963, and was commissioned a 2nd Lieutenant in the U.S. Air Force on June 7, 1967.

Lt Donahue next completed Undergraduate Navigator Training and was awarded his navigator wings at Mather AFB, California, in May 1968, and then attended C-123 Provider Combat Crew Training before deploying to Southeast Asia in August 1968. He served as a UC-123K Night FAC navigator with the 606th Special Operations Squadron of the 56th Special Operations Wing at Nakhon Phanom Royal Thai AFB, Thailand.

On December 13, 1968, a C-123K Provider with a crew of seven, left Nakhon Phanom Air Base, Thailand, for a mission over Savannakhet Province, Laos. The Provider was the forward air controller for another aircraft on the same mission, and the two aircraft collided. The crews of other aircraft in the area saw a large fireball that seemed to break up into three smaller fireballs and crash. It was later determined that one of the aircraft broke in two during the collision, accounting for the three fireballs observed. The pilot of the C-123K parachuted to the ground and was picked up by a search and rescue (SAR) team later the same day. He was the only individual to survive the collision; no other parachutes were observed and no other rescue beeper signals were received. SAR efforts continued for several more hours after rescuing the pilot but no other remains were found or recovered.

Lt Donahue was officially held in a Missing in Action status and was promoted through the ranks to Major before being declared dead on February 2, 1981. His remains have never been recovered.

Donahue’s name is remembered on Panel West 36, Line 14 of The Wall.

The Cadet and the Goat 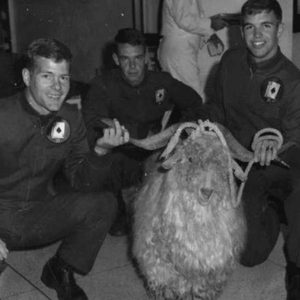 Growing up on military bases throughout his childhood, he had a penchant for pranks. While a cadet at the Air Force Academy, he and his roommate John Albright, became fast friends and were known for their hijinks. Their penultimate achievement was the kidnapping of the Naval Academy goat prior to the Air Force/Navy football game and parading it onto the field.

Following graduation from the Academy, Albright and Donahue were flying aboard a C-123 over the Ho Chi Minh trail on December 13, 1968. While providing illumination for accompanying bombers, they were involved in a mid-air collision. As their plane fell to the ground, it is believed both were able to escape. After search and rescue efforts returned only the pilot, they were listed as Missing in Action. Donahue’s name is remembered on Panel West 36, Line 14. Albright is listed just above him on Line 13.

You can see the cross symbol next to the names of Albright and Donahue – indicating their current status as Missing in Action.

Of the more than 58,000 names on the Vietnam Veterans Memorial, approximately 1,500 are still listed as Missing in Action.

During the Vietnam War, POW/MIA bracelets were created and distributed to bring awareness to those service members whose remains were unaccounted for.

In a remembrance left on Donahue’s Wall of Faces page in 2017, Thomas Recke said the following:

I have been wearing CPT Donahue’s POW bracelet since 2001 and it has only left my body a few times (usually x-rays and MRIs). No one remembers the sacrifice of soldiers like other soldiers. I am a 10 year vet, 11b with a combat tour in Iraq (OIF2). As tradition dictates, I’ll be wearing his bracelet till he or his remains are back on American soil. Small burden compared to the ultimate sacrifice CPT Donahue has paid.

The names of the missing are inscribed on The Wall in Washington, D.C.