On Memorial Day in 1984, a set of unidentified remains were interred in the Tomb of the Unknowns, alongside remains of service members from WWI, WWII and the Korean War at Arlington National Cemetery. Those “unknown” remains, later identified as Michael Blassie, became representative of those who remained unaccounted for in Southeast Asia.

On May 11, 1972, Blassie was flying an A-37B Dragonfly aircraft when it was hit by ground fire near An Loc, 60 miles outside of Saigon. His wingman witnessed an explosion and there was no indication that Blassie survived. Blassie was then listed as missing-in-action for more than a decade. He was 24 years old. Blassie’s remains were taken “home” to the United States in 1984 but they were not positively identified, and instead were interred at the Tomb of the Unknowns. Forensic technology was limited at the time, preventing positive identification.

Michael Blassie was born on April 4, 1948, in St. Louis, Missouri to George and Jean Blassie. He was the oldest of five children. In 1970, Blassie graduated from the U.S. Air Force Academy and went on to serve as a 1st Lieutenant with the 8th Special Operations Squadron in Vietnam.

In a ceremony at Pearl Harbor in Hawaii on May 17, 1984, X-26 was officially classified as the remains of the “Unknown Soldier” from Vietnam and sent to the United States aboard the U.S.S. Brewton.

The remains were then sent to Travis Air Force Base on May 24, and arrived at Andrews Air Force Base the following day. Many Vietnam veterans, President Ronald Reagan, and First Lady Nancy Reagan visited X-26 as he lay in state in the U.S. Capitol Rotunda for three days. On Memorial Day, May 28, 1984, X-26 was escorted to Arlington National Cemetery. A funeral was held and President Ronald Reagan presented the Medal of Honor to the Vietnam Unknown. The President also accepted the interment flag at the end of the ceremony.

Ten years later in 1994, a former Army Green Beret Ted Sampley called the Blassie family and said he had written an article for the Vietnam veterans’ newsletter proving that Blassie was buried in the Tomb of the Unknowns.

Media attention increased around Blassie and on Jan. 19, 1998, the CBS Evening News aired the story. Air Force Lt. Michael J. Blassie WAS the Vietnam Unknown buried in Arlington Cemetery, Eric Engberg reported. The military for years had used the secrecy of the selection process, he claimed, to hide Blassie’s identity from his family and the public.

After Blassie’s family secured permission and petitioned the Department of Defense to open the site and conduct DNA testing, the remains of X-26 were exhumed on May 14, 1998. As a result of mitochondrial DNA testing, scientists were able to match X-26’s DNA to Michael Blassie’s mother and oldest sister.

On June 30, 1998, the Defense Department announced that the Vietnam Unknown had been identified. 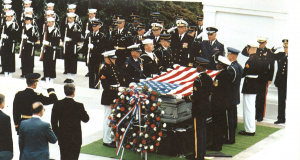 At the request of the family, Blassie’s remains were removed from the Tomb of the Unknowns.  On July 11, 1998, 1st Lt. Michael Blassie was buried with full military honors in Jefferson Barracks National Cemetery in Missouri.

While X-26 was awarded the Medal of Honor when he was interred in the Tomb of the Unknown at Arlington National Cemetery, it was rescinded when the remains were identified as Michael Blassie.

Blassie was known as the “Vietnam War Unknown” for more than 20 years. While his remains were accounted for, approximately 1,500 service members are still listed as Missing in Action. The names of the missing are inscribed on The Wall in Washington, D.C.

As part of VVMF’s The Wall That Heals mobile exhibit, a piece of black granite with Blassie’s name is inscribed upon it. Visitors are able to view it and make rubbings of his name. This piece of granite is a part of our mobile exhibit to help bring awareness to those service members who remain unaccounted for.

Jean Blassie dies; she fought to get her son buried at home in St. Louis

Last soldier buried in Tomb of the Unknowns wasn’t unknown

The Unknown Serviceman of the Vietnam Era – Commemorative Booklet