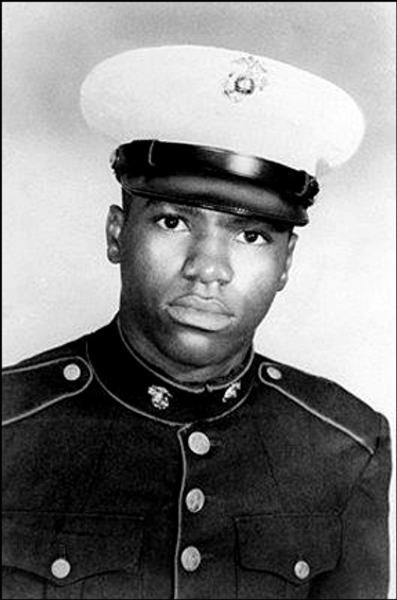 Dan Bullock was  born on December 21, 1953 in Goldsboro, North Carolina. He moved to Brooklyn, New York with his family as a teenager following his mother’s death. Unsatisfied with his living situation in New York and discouraged by a lack of opportunity, he went searching for a more promising future.

When he was just 14 years old, Bullock walked into a U.S. Marine Corps recruitment station. He falsified the date on his birth certificate to read December 21, 1949 so he could pass as 18 years old. Bullock enlisted in the U.S. Marine Corps on September 18, 1968. His family was unaware of his decision until he came home with papers in his hand.

Bullock was able to successfully complete boot camp in Parris, Island, South Carolina and he arrived in Vietnam on May 18, 1969. He was stationed at An Hoa Combat Base in Quang Nam Province and was assigned the task of rifleman to Fox Company, Second Battalion, Fifth Marine Regiment.

Bullock was large in stature, but despite his size, he was a boy in every regard. He kept to himself and his comrades took notice. Cpl. Steve Piscitelli, who also served with the Second Platoon of Fox Company, picked up on Bullock’s reserved nature and felt it necessary to take him under his wing.

On June 7, 1969, Bullock was killed by small arms fire while on night watch at An Hoa combat base. He was 15 years old and had been in-country nearly one month. He was the youngest American service member to be killed in the Vietnam War.

In a New York Times story, Bullock’s father had said his son had hopes to become a pilot or a firefighter. While he insisted his son get an education, Bullock stated that signing up was the quickest way to get an education.

Bullock is buried in his hometown of Goldsboro, North Carolina. In 2003, a portion of Lee Avenue in Brooklyn was renamed for him. A highway historical marker commemorating his service and sacrifice was unveiled in Goldsboro in 2017.

The name of Dan Bullock is inscribed on Panel 23W, Line 23 of The Wall in Washington, D.C.

He Enlisted at 14, Went to Vietnam at 15 and Died a Month Later: New York Times