Artist, designer and environmentalist, Maya Lin interprets the natural world through science, history, politics, and culture, creating a remarkable and highly acclaimed body of work in art and architecture. Her works merge the physical and psychological environment, presenting a new way of seeing the world around us.

Lin’s Memorials address the critical social and historical issues of our time. From the Vietnam Memorial which she designed as an undergraduate student at Yale, to The Civil Rights Memorial in Alabama, and the Women’s Table at Yale make our history part of the landscape. To her latest, What is Missing? which is focused on the environment.

Lin’s art explores how we experience and relate to Nature, setting up a systematic ordering of the land that is tied to history, memory, time, and language. Her interest in landscape has led to works influenced by topographies and natural phenomena.

Her work asks the viewer to reconsider nature and the environment at a time when it is crucial to do so. A committed environmentalist, she is working on her last memorial, “What is Missing?”; a cross-platform, global memorial to the planet, located in select scientific institutions, online as a website, and a book, calling attention to the crisis surrounding biodiversity and habitat loss. Please visit www.whatismissing.org for more information.

Her architectural projects include the main building and master plan for Novartis Institutes for Biomedical Research in Cambridge, MA, the Museum for Chinese in America (2009) in New York City and the Riggio-Lynch Interfaith Chapel (2004) and Langston Hughes Library (1999) in Clinton, Tennessee. Currently she is working on the redesign of the Neilson Library at Smith College. Her designs create a close dialogue between the landscape and built environment, and she is committed to advocating sustainable design solutions in all her works.

A member of the American Academy of Arts and Letters and the American Academy of Arts and Sciences, she has been profiled in, among others, TIME, The New York Times Magazine and The New Yorker. The 1996 documentary about her, Maya Lin: A Strong Clear Vision, won the Academy Award for Best Documentary. Her book about her work and creative process, Boundaries, is in its fifth printing with Simon & Schuster. Maya Lin: Topologies, a monograph spanning the past 30 years of her career was first released in Fall 2015 by Skira Rizzoli and is in its second printing. In 2009 she was awarded the National Medal of Arts, the nation’s highest honor for artistic excellence, and in 2016 she was awarded the Presidential Medal of Freedom, by President Barack Obama, the Nation’s highest Civilian Honor.

Maya Lin conceived her design as creating a park within a park — a quiet protected place unto itself, yet harmonious with the overall plan of Constitution Gardens. To achieve this effect she chose polished black granite for the walls. Its mirror-like surface reflects the images of the surrounding trees, lawns and monuments. The Memorial’s walls point to the Washington Monument and Lincoln Memorial, thus bringing the Memorial into the historical context of our country. The names are inscribed in the chronological order of their dates of casualty, showing the war as a series of individual human sacrifices and giving each name a special place in history.

“Walking through this park-like area, the memorial appears as a rift in the earth, a long, polished, black stone wall, emerging from and receding into the earth. Approaching the memorial, the ground slopes gently downward and the low walls emerging on either side, growing out of the earth, extend and converge at a point below and ahead. Walking into this grassy site contained by the walls of the memorial we can barely make out the carved names upon the memorial’s walls. These names, seemingly infinite in number, convey the sense of overwhelming numbers, while unifying these individuals into a whole.

The memorial is composed not as an unchanging monument, but as a moving composition to be understood as we move into and out of it. The passage itself is gradual; the descent to the origin slow, but it is at the origin that the memorial is to be fully understood. At the intersection of these walls, on the right side, is carved the date of the first death. It is followed by the names of those who died in the war, in chronological order. These names continue on this wall appearing to recede into the earth at the wall’s end. The names resume on the left wall as the wall emerges from the earth, continuing back to the origin where the date of the last death is carved at the bottom of this wall. Thus the war’s beginning and end meet; the war is ‘complete,’ coming full- circle, yet broken by the earth that bounds the angle’s open side, and continued within the earth itself. As we turn to leave, we see these walls stretching into the distance, directing us to the Washington Monument, to the left, and the Lincoln Memorial, to the right, thus bringing the Vietnam Memorial into an historical context. We the living are brought to a concrete realization of these deaths.

Brought to a sharp awareness of such a loss, it is up to each individual to resolve or come to terms with this loss. For death, is in the end a personal and private matter, and the area contained with this memorial is a quiet place, meant for personal reflection and private reckoning. The black granite walls, each two hundred feet long, and ten feet below ground at their lowest point (gradually ascending toward ground level) effectively act as a sound barrier, yet are of such a height and length so as not to appear threatening or enclosing. The actual area is wide and shallow, allowing for a sense of privacy, and the sunlight from the memorial’s southern exposure along with the grassy park surrounding and within its walls, contribute to the serenity of the area. Thus this memorial is for those who have died, and for us to remember them.

The memorial’s origin is located approximately at the center of the site; its legs each extending two hundred feet towards the Washington Monument and the Lincoln Memorial. The walls, contained on one side by the earth, are ten feet below ground at their point of origin, gradually lessening in height, until they finally recede totally into the earth, at their ends. The walls are to be made of a hard, polished black granite, with the names to be carved in a simple Trajan letter. The memorial’s construction involves recontouring the area within the wall’s boundaries, so as to provide for an easily accessible descent, but as much of the site as possible should be left untouched. The area should remain as a park, for all to enjoy.” 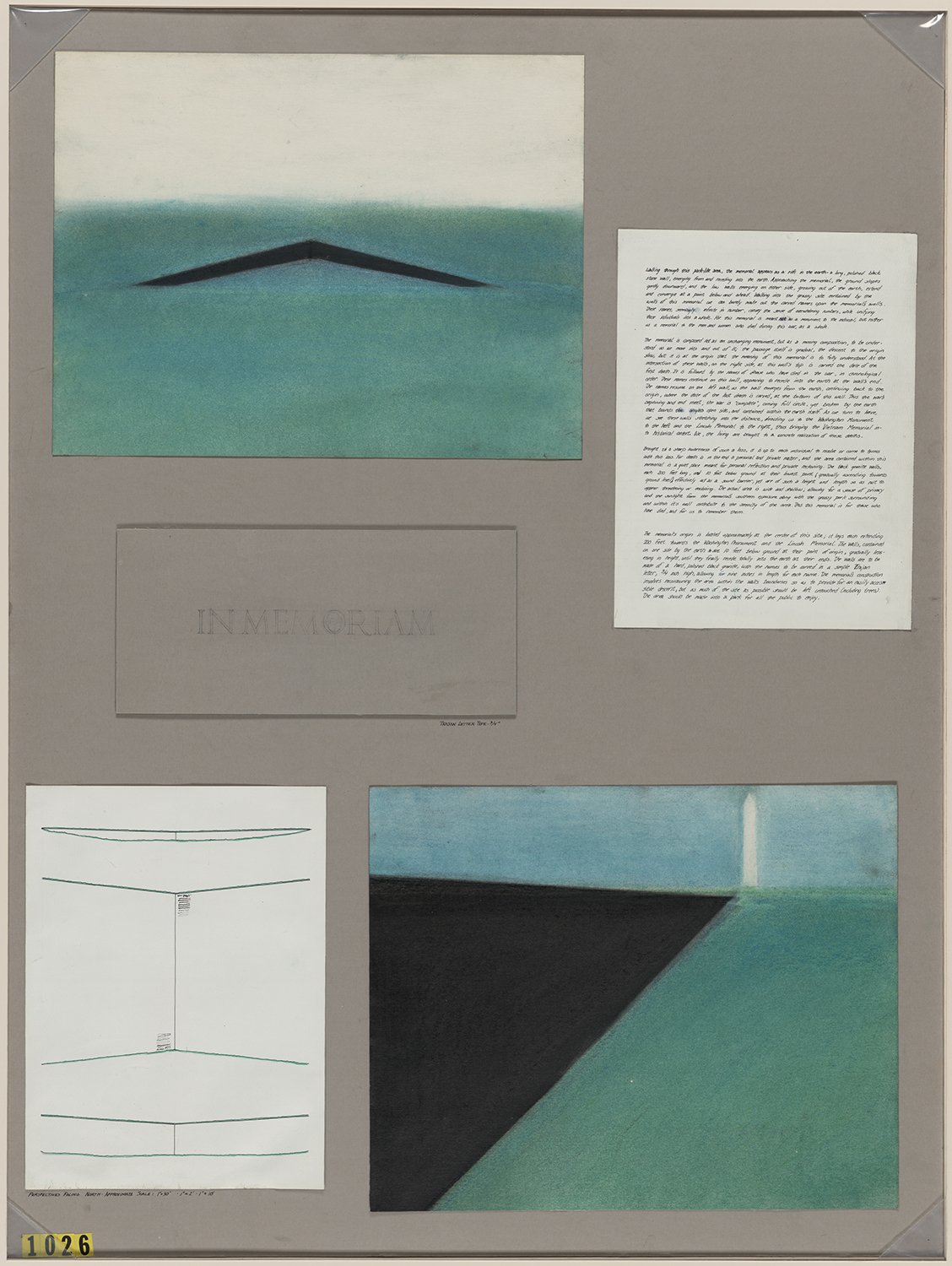