In April of 1956 three women arrive in Saigon to teach South Vietnamese nurses medical procedures and techniques. This was the start of American nursing during the Vietnam War. In Vietnam, nurses could be male or female, however the majority were women with the average age being 23. Tours lasted twelve months, but differences hospital size and locations made each experience unique. These young women were tasked with performing medical procedures in a radically different environment than their predecessors had in World War II. Helicopters meant that service members who would have previously died on the long haul from the battlefield could now get a medevac and be seen within minutes. The swiftness of this care meant a higher rate of survival, but also saw nurses dealing with more intense traumas. Working long shifts in sweltering and dangerous conditions, nurses ensured that service members, some in their final hours, found healing and care. More than 5,000 nurses served in Vietnam and eight women, all nurses, gave their lives. Their names are inscribed on the Vietnam Veterans Memorial.

The civilian women of the American Red Cross Supplemental Recreation Activities Overseas were frequently known by another name, Donut Dollies.

Distinctive in their light-blue dresses, all had to have college degrees and typically were between the ages of 21-25.  Donut Dollies originally were part of The American Red Cross Clubmobile Service and originated during the Second World War. The women who volunteered with Clubmobiles were meant to bring “a connection of home” to service members during war. They eventually became known as Donut Dollies because one of their many tasks was making and serving donuts. During the Vietnam War the Donut Dollies were brought back as a morale booster, organized under a program called Supplemental Recreation Activities Overseas. In their light-blue dresses, the women in the program provided much needed organized recreation time for service members, spontaneous quiz games, and always remained a source of positivity. Donut Dollies considered always wearing a smile an important duty.

The Vietnam Women’s Memorial was added to the Memorial Site and dedicated on November 11, 1993.

Sculpted by Glenna Goodacre, the 2,000 pound, 6-foot 8-inch sculpture portrays three women, one of whom is caring for a wounded male soldier. In the surrounding site, eight yellowwood trees were planted to symbolize the eight women whose names are on The Wall. 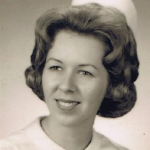