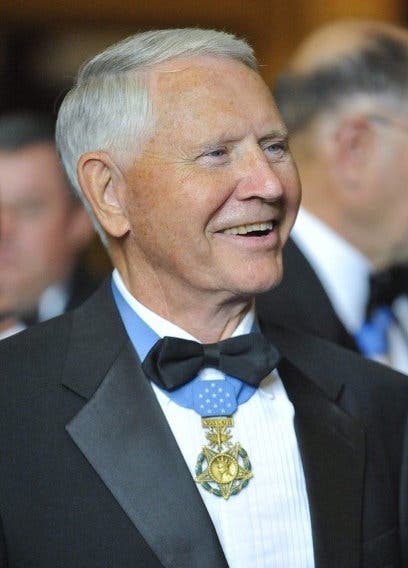 Leo Thorsness was a highly decorated American pilot of the Vietnam War. He was a Medal of Honor recipient and spent six years as a prisoner of war.

Thorsness was born on Feb. 14, 1932, in Walnut Grove, Minnesota and grew up on the family farm. He attended South Dakota State University in 1950, then enlisted in the Air Force a year later. After joining the Air Force, he graduated in 1964 from what is now the University of Nebraska at Omaha and later received a master’s degree in systems management from the University of Southern California.

He began his missions in Vietnam in 1966. He was assigned to the 355th Tactical Fighter Wing, 357th Tactical Fighter Squadron. His squadron was known as the “Wild Weasles” and they were tasked with destroying surface-to-air missiles (SAMs) based in North Vietnam in order to protect fighter-bombers during raids.

On April 19, 1967, Thorsness was the lead pilot in a U.S. F-105 fighter-bomber attacking surface-to-air missile sites near Hanoi. He and his electronic warfare officer, Harold Johnson, knocked out one site with a missile and scored a direct hit on another. They realized that one plane in their group had been hit, and the crew members had ejected. While flying in circles over the parachuting airmen, Thorsness spotted an enemy MiG-17 fighter jet and shot it down. As U.S. rescue helicopters approached, Thorsness heard through his radio that another MiG formation was nearby. Despite being low on fuel and ammunition, he flew through antiaircraft fire and single-handedly engaged four MiGs in aerial combat.

As he returned to his base, he was about to refuel from an airborne tanker when he learned another F-105 in his group was lower on fuel. Thorsness allowed the other plane to refuel first. When he finally touched down, his fuel tanks were empty.

Eleven days later on April 30, Thorsness was shot down over North Vietnam on his 93rd mission. He suffered serious leg injuries when he was ejected. As a result, he and Captain Harold Johnson were taken prisoner.

Thorsness was held in solitary confinement at the Hanoi Hilton and tortured almost every day. His back was broken in four places. It was there that Thorness and other POWs learned the tap code, which allowed POWs to communicate through their cells. At the Hanoi Hilton, he was a cellmate of John McCain.

Thorsness was released during Operation Homecoming on March 4, 1973. Later that year, he was presented the Medal of Honor from President Richard M. Nixon for his actions on April 19, 1967. Thorness later retired from the military at the rank of Colonel.

Following his time in the military, Thorsness entered politics. He ran for U.S. Senate in 1974 but lost to George McGovern, who had run an unsuccessful presidential campaign against Nixon. Four years later, Thorsness ran for a seat in the House of Representatives, but lost narrowly to Tom Daschle, who went on to serve as the Senate majority leader.

After working as an executive for Litton Industries in California, Thorsness moved to the Seattle area. He served in the Washington state senate from 1988 to 1992.

Thorsness passed away in May of 2017 at the age of 85. He is survived by his wife, Gaylee, one daughter, and two grandchildren. 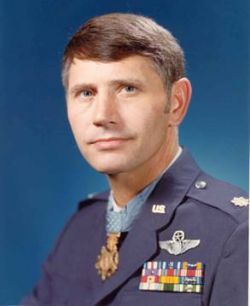 Leo Thorsness was awarded the Medal of Honor for his actions on April 19, 1967. Thorsness, an F-105 Thunderchief pilot, was on a surface-to-air missile (SAM) suppression mission over North Vietnam. According to his citation, the pilot and his wingman attacked and silenced a SAM site with air-to-ground missiles, then destroyed a second SAM site with bombs. In the attack on the second missile site, Thorsness’ wingman was shot down and the two crewmembers abandoned their aircraft.

Thorsness kept the crewmembers in sight while simultaneously destroying a MIG-17 aircraft. Despite being dangerously low on fuel, he went on to deter four more MIGs from the scene while allowing another friendly aircraft to refuel from a nearby tanker, preventing further loss of life and aircraft.

Citation: For conspicuous gallantry and intrepidity in action at the risk of his life above and beyond the call of duty. As pilot of an F- 105 aircraft, Lt. Col. Thorsness was on a surface-to-air missile suppression mission over North Vietnam. Lt. Col. Thorsness and his wingman attacked and silenced a surface-to-air missile site with air-to-ground missiles, and then destroyed a second surface-to-air missile site with bombs. In the attack on the second missile site, Lt. Col. Thorsness’ wingman was shot down by intensive antiaircraft fire, and the 2 crewmembers abandoned their aircraft. Lt. Col. Thorsness circled the descending parachutes to keep the crewmembers in sight and relay their position to the Search and Rescue Center. During this maneuver, a MiG-17 was sighted in the area. Lt. Col. Thorsness immediately initiated an attack and destroyed the MiG. Because his aircraft was low on fuel, he was forced to depart the area in search of a tanker. Upon being advised that 2 helicopters were orbiting over the downed crew’s position and that there were hostile MiGs in the area posing a serious threat to the helicopters, Lt. Col. Thorsness, despite his low fuel condition, decided to return alone through a hostile environment of surface-to-air missile and antiaircraft defenses to the downed crew’s position. As he approached the area, he spotted 4 MiG-17 aircraft and immediately initiated an attack on the MiGs, damaging 1 and driving the others away from the rescue scene. When it became apparent that an aircraft in the area was critically low on fuel and the crew would have to abandon the aircraft unless they could reach a tanker, Lt. Col. Thorsness, although critically short on fuel himself, helped to avert further possible loss of life and a friendly aircraft by recovering at a forward operating base, thus allowing the aircraft in emergency fuel condition to refuel safely. Lt. Col. Thorsness’ extraordinary heroism, self-sacrifice, and personal bravery involving conspicuous risk of life were in the highest traditions of the military service, and have reflected great credit upon himself and the U.S. Air Force.

On April 30, 1967, Leo Thorsness was flying his 93rd mission when a MiG hit his plane with an air-to-air missile. He bailed out with Captain Harold Johnson, suffering severe knee injuries. Both men were captured and transported to the Hanoi Hilton.

Thorsness was in captivity when he learned that he had been recommended for the Medal of Honor. However, no announcement was made by American military officials until Thorsness returned home in March 1973. There were fears that his captors would retaliate and he would be subjected to more severe treatment while in captivity.

Leo Thorsness spent a total of six years as a prisoner of war. During the Vietnam War, POW/MIA bracelets were created and distributed to bring awareness to those service members whose remains were unaccounted for. Thorsness’ POW/MIA bracelet is currently a part of The Wall That Heals mobile exhibit.

In 1965, while flying an F8 Crusader, Robert Shumaker became the second airman to be shot out of the sky over North Vietnam, his parachute barely opening before hitting the ground. During his eight years in captivity Shumaker helped coin the nickname the Hanoi Hilton, was involved in the creation of the Tap Code, an elaborate system created to allow US POW’s to communicate through their cells and in person without their captors becoming aware, and was part of a group remembered as the Alcatraz Gang. The Alcatraz Gang – separated from the regular prison population at the Hanoi Hilton – this group of Navy and Air Force officers were thought to be extremely resilient and defiant in the face of their NVA captors. They were placed in solitary confinement and endured extra rounds of torture based on rank and age. 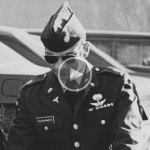 In August of 1967, Hal Kushner deployed to Vietnam as an Army Flight Surgeon. Not four months later during a dark and rainy evening, Kushner was aboard a helicopter that crashed into the side of a mountain in South Vietnam, leaving only himself, the copilot, and the crew chief as survivors. The next day the crew chief walked down to find help while Kushner and the wounded copilot did as the men had been instructed and stayed with the downed aircraf,t hoping that rescue would come soon. Then the copilot died and the crew chief did not return, having been shot just ten miles away. Upon crashing, Kushner had received a broken arm and collar bone, and multiple wounds from an M-60 that fired while the aircraft was engulfed, yet he managed to belt strap his arm to his side and walk down the mountain in search for help.

Kushner spent the next few years in the jungles of South Vietnam, surviving with other POW’s on spoiled rice and incredibly desolate conditions. In 1971, Kushner and the other men in his jungle prison were moved 560 miles over 57 days to the POW camp called the Hanoi Hilton, where he remained until March of 1973. 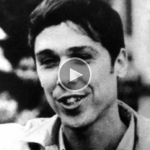 David Harker was drafted into the US Army and deployed for Vietnam in November 1967. Harker was captured with three other Americans during an ambush near Quang Tin Province in January 1968. He survived a stab wound from a bayonet to his side. For the next three years, Harker was held in the jungles of South Vietnam. Harker and other prisoners were held in jungle camps with deplorable conditions and no access to clean food, water or adequate health care. Harker remembers watching many other POW’s die in the camp and suffered himself from a debilitating skin condition. Harker also recalls sharpened bamboo lining the perimeter of the camps, threatening a painful death to anyone who might try and escape. In 1973 after 1,884 days in captivity, David Harker was released.

Leo Thorsness, Medal of Honor Recipient in Vietnam, Dies at 85: The Washington Post

Leo K. Thorsness himself gives an eight minute, 44 second report on what happened in his time during the Vietnam War.

Leo K. Thorsness talks about his time as a POW during the Vietnam War.